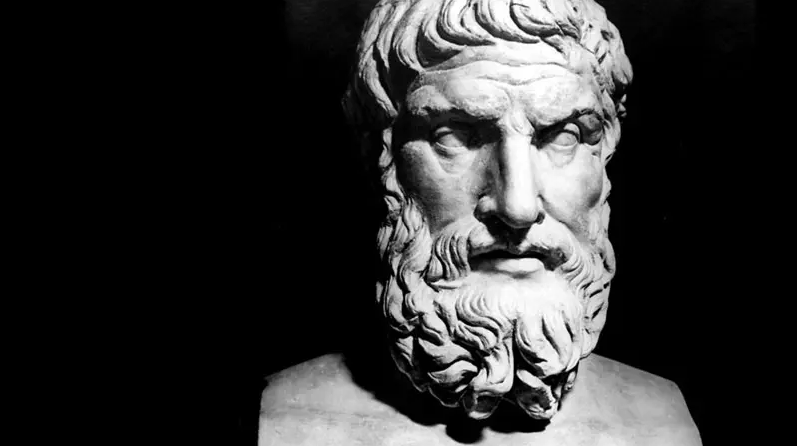 I had only a brief brush with Stoic thought as a philosophy major in college, and like most people, misunderstood it’s tremendous value. I thought “being Stoic” meant being tough and not showing your feelings. Nothing could be further from the truth.
I was reintroduced to Stoic thinking when, based on my other readings, amazon.com suggested I might like a short little book called “The Art of Living.” It’s all about the teachings of Epictetus (above), a former slave who ran a Stoic academy for years. His main ideas are collected in a book called Discourses, but his student-scribe Arrian captured the best of the best in a wonderful short book entitled Enchiridion, which means manual or handbook, a manual for living.
Here are the first words of the Enchiridion, available free online here http://classics.mit.edu/Epictetus/epicench.html , which really caught my attention:

“The things in our control are by nature free, unrestrained, unhindered; but those not in our control are weak, slavish, restrained, belonging to others. Remember, then, that if you suppose that things which are slavish by nature are also free, and that what belongs to others is your own, then you will be hindered. You will lament, you will be disturbed, and you will find fault both with gods and men. But if you suppose that only to be your own which is your own, and what belongs to others such as it really is, then no one will ever compel you or restrain you. Further, you will find fault with no one or accuse no one. You will do nothing against your will. No one will hurt you, you will have no enemies, and you not be harmed.

“Aiming therefore at such great things, remember that you must not allow yourself to be carried, even with a slight tendency, towards the attainment of lesser things. Instead, you must entirely quit some things and for the present postpone the rest. But if you would both have these great things, along with power and riches, then you will not gain even the latter, because you aim at the former too: but you will absolutely fail of the former, by which alone happiness and freedom are achieved.

“Work, therefore to be able to say to every harsh appearance, ‘You are but an appearance, and not absolutely the thing you appear to be.’ And then examine it by those rules which you have, and first, and chiefly, by this: whether it concerns the things which are in our own control, or those which are not; and, if it concerns anything not in our control, be prepared to say that it is nothing to you.”

Stoic thinking is not unChristian. In fact it has inspired many Christians, monks and world leaders for centuries. George Washington and other fathers of our country were Stoic thinkers.
Ron Rivera, beloved Panthers football coach now at Washington, told his players, “Control Your APE.” APE stands for Attitude, Preparation and Effort. Wonderful Stoic thinking which many professional football players found valuable.
If this interests you at all, I highly recommend you get Discourses by Epictetus – it has the Enchiridion in the back – or if you are really cautious about spending a few dollars, just get the Enchiridion or the Art of Living on amazon. Or read it free online using the link above. It is a wonderful aid for those of us who are dealing with the many challenges of life and need to keep our chins up and our attitudes positive. It is also a wonderful complement to Christian faith, if that matters to you.

How to be more successful in life and business

How to be more successful in life and business, concerns of faith, ideas and other topics of interest can be found here on BuckLawrimore.com. In turn many of these posts get replicated on Twitter, LinkedIn, Facebook, Google+ and other social media.

You can see my basic bio on the About page, and get an overview of the five books I’ve written on the Books page.

I also provide life coaching and individual consulting services to help folks like you with lessons and insights I’ve learned in 40-plus years in life and business. Working with hundreds of very diverse clients as well as co-managing our own company has taught me a lot about what works and doesn’t work in the real world, how to handle all kinds of problems, and how to help others enjoy greater success.

Please contact me to discuss an affordable coaching or consultation session by phone or Skype anywhere in the world, or in-person if you are in the Charlotte area – use our Contact form or call 704-332-4344.

–All the best, Buck Lawrimore